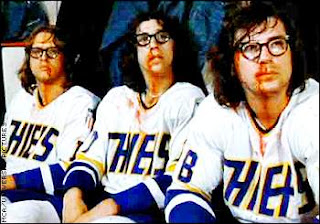 Wow, it's been almost six weeks since I've posted here - but I have a good reason, and I'll write about that another time. Right now, I'm thinking about (as I put one of them into the DVD player) 10 movies I have watched so many times I begin to think I am demented.
What is it about certain movies that makes you want to watch them over and over - when there are surely plenty of other movies you've never seen once that are worth seeing? Why would I invest yet another 2 hours in watching one I've already seen when there are both well-known and undiscovered masterpieces unviewed?

I will ponder these questions as I make this list of ten (representative but not comprehensive) and maybe an answer will define itself.

2. The Wizard of Oz
OK so sure, I watched it a dozen times before I was 18 but so what? I'd watch it again right now. Classic in every way, and even more so because all the actors in it were sure that it was stupid and sure to be a flop when they were making it, and because all the little people were pervy and troublemakers, and because it has so much history. The editing is perfect and the fllying monkeys still scare the crap out of me.

3. Amelie
Could any movie be more perfectly imagined? Could anyone be cuter than Audrey Tatou?

4. Singin' in the Rain
The zenith of the movie musical - all the pieces fall together so easily. All I ever wanted to be was Gene Kelly, so I am still working on the moves.

5. Rock Star
Super-underrated 2001 flick with Mark Wahlberg and a sexy Jennifer Anniston -produced by Clooney - that tells an inside showbiz story so well - combining the passion performers feel with the cynical reality of the business. Heartfelt and real and fun every time.

6. Gladiator
Shouldn't be a guilty pleasure since it's a Ridley Scott film and a Best Picture winner, but bottom line still really commercial so I need to feel bad that I like it right? Perfectly shot, perfectly scored, perfectly edited. Joaquin Phoenix at his best and before he went off his nut. What more could I want?

7. Waiting for Guffman
For theatre nerds this movie creates the possibility of a an aneurysm from laughing too hard. And the danger increases with every viewing. Christopher Guest's best to date IMHO.

8. Duck Soup
Before I wanted to be Gene Kelly (or George Clooney) Iwanted to be Groucho. Even taught myself to smoke cigars in preparation. Duck Soup is the ultimate insanity and anarchy that the Marx Brothers created - they were outside law and convention and hilarious at the same time.

9. Saturday Night Fever
Actually kind of choppy and flawed in a number of ways, like a lot of 1970s movies, but compelling all the same. Unforgettable to me in that it always reminds me that the first time i saw it I knew that something had changed in pop culture and things would never be quite the same again. Also notable in that Travolta was prettier than any of the women in the movie.

10. Battle of the Bulge
Always watch it when it comes on TV because my dad used to say "Maybe I'll see myself" when it was coming on. Took me a few years to figure out that was a joke, and yet I always watch it thinking somehow maybe i will see him after all.

This list could go on and on I think. But what so these over-watched movies have in common? Laughs? Comfort? Great timing? Zeitgeist?

What are your movies you've watched so many times you feel strange about it?
Posted by Barry Martin at 8:36 PM 9 comments: Links to this post